….with apologies to Macbeth and William Shakespeare.  There is something ironic about where we are now though, compared to “the Scottish Play”.  The play has characters with vaulting ambitions who fall by the wayside, we’ve had characters with vaulting ambitions who’ve fallen by the wayside too, but we’ve not reached the last act of our play, in fact we’ve not even reached the intermissions.  Oh we’re in the middle of tragedy of Shakesperian proportions, that’s true. But what happens next?

We all know what’s happened in our play so far.  The Brexit vote took place and almost all the leading characters around it have been vanquished.  Not quite as bloodily as Shakespeare did, but still they’ve exited the stage.  So what are we left with – what might happen in the next acts in our play?    Ay, there’s the rub (Hamlet – sorry I’m mixing up my plays!) Look at where we are and what might happen – because the only certainty is that no-one,  repeat that, no-one actually can forecast what is going to happen to the UK in the next 12 months.  All that can be done is to offer some scenarios. Here’s some of the reasons why…

Taking back control  is what Brexit was all about.  The vote however has had some possiby unforeseen consequences.  The £ Sterling is down by around 10% against the US Dollar $ and the Euro.  The chart below (sourced from xe.com) shows what’s going on. 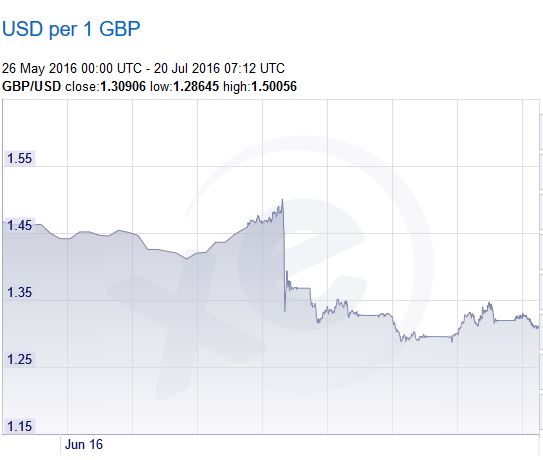 The ££ floats freely on the world markets which means that the market sets the exchange rates.  The UK Government doesn’t at present, try to set the exchange rate levels. (This has been done in the past, with mixed results).  So the markets are in control of the value of the ££.   When it drops, as it did on announcement of the vote and as it has more or less stayed at – that’s the markets telling us what they think our currency is worth.  And right now we’re all poorer than we were before the vote as the ££ doesn’t go as far.    How can this be when the FTSE100 has recovered so much I hear you ask?  Using the overall FTSE100 as a measure of the UK economy isn’t really a good idea.   Many of the FTSE100 companies are global and earn much of their money outside the UK.  Companies like Royal Dutch Shell, for example.  They are doing very well since the Brexit result because they measure their earnings in $$.  As the ££ is low so this give a boost to such businesses.  On the other hand, businesses which trade primarily in ££ have not recovered since the vote.  e.g. RBS.  So the FTSE100 ain’t the best tool around.  (I don’t really understand why we fetishise the FTSE100, even to the extent of having its movements scrutinised and reported on a daily basis across much of the media).  The FTSE250, which comprises of a better mix of businesses trading in the UK seems to me to be a better measure for the UK economy.  Now its getting there, pretty much back to where it was before the vote.  The chart below shows this.  (sourced from Yahoo Finance)

So the economy is in good shape right?   Well maybe……. The impact of the fall in the ££ hasn’t really fed through to the economy yet.  Imported materials will cost more but our exports should cost less for those buying them.  There’s a couple of  problems with this though,

Although that’s a pretty depresssing picure, it’s not quite the whole story as the UK does run a positive trade in Services.  the difficulty we’re going to face is that such Services are outwith the terms of most of the Trade Agreements which are options for the future UK.  I’ll cover this in another blog post in a day or two.

Anyone who thinks they can forecast what’s going to happen beyond the next 6 months is mad.  Here’s some of the variables they’d have to be considering:

That’s enough for a blog post for now.  As you can see, the UK has some real problems and challenges to get round in the short and medium terms and just wishing them away isn’t likely to cut it on the world markets.  Brexit may yet prove to be the best thing ever for the UK but the short and medium term costs could outweigh the benefits for a long time to come.

I welcome your comments and discussions.  No-one’s got a plan yet so maybe we can crowdsource one.