I’ve written a little in a previous post about the electoral reforms being pushed through Parliament by the Tory Party.  (here)    Time to just update this with a few more thoughts on the actions of the Tory Party.

The plans, for what they are, are to reduce the number of constituencies to 600.  This is being done in the name of “improving democracy”.  But is it?

Since about 2010, David Cameron  (the worst Prime Minister in UK history) created more than 236 new Peers to sit in the House of Lords.   So, we have a Tory Party saying we need to reduce the number of MPs in the name of democracy, but we’ll stuff the House of Lords full of far more people than the number of MPs we’ll reduce.  Here’s an interesting, although 12 months old, article on this subject written by John Humpreys.

Is this democracy in action?  Or is it gerrymandering and corrupt practices?  It’s your call.

The Tory party won an absolute majority in the UK election in 2015 with 36.9% of the votes cast. So 64.1% of the UK voting public did not vote for them.  Well that’s the vagaries of the UK’s ‘First Past The Post’ voting system for you.  As the table below shows, FPTP really doesn’t do a very good job of representing  how the public voted.  The case in oint has to be the difference between the Tories and UKIP.  The Tories received 34,244 votes per seat and UKIP received 3,881,129 votes per seat! 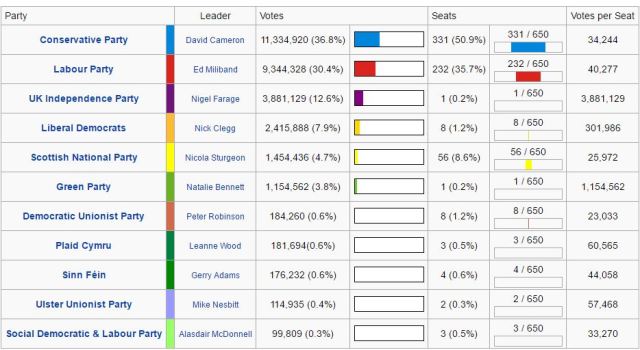 So what would the UK parliament look like if the parties got the numer of seats pro-rata the number of votes which were given to them?

So, just how democratic is the UK?   Especially in the light of the change being proposed by the Tories?    And don’t forget the potential Election Fraud…….