I’ll admit to being very influenced at the moment by this book :-  Postcapitalism – A Guide To Our Future written by Paul Mason.   (you could buy a copy from Amazon.  It’s a good read, albeit with detailed and sometimes heavy economic theory.) 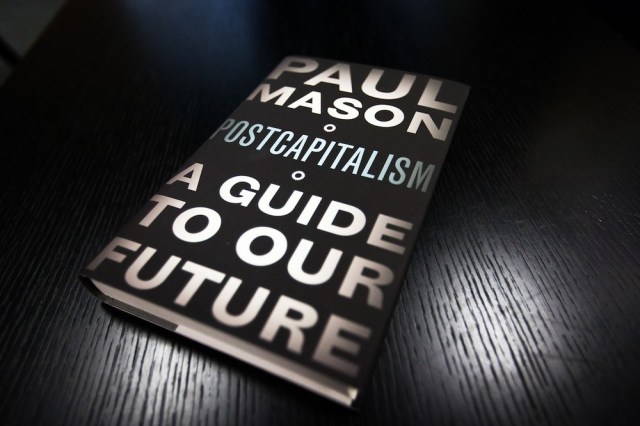 This post isn’t a review of the book, just to highlight one of the topics Paul Mason develops in it.  It’s something I wrote about a wee while ago – the theory of ‘Long Waves’ in economic cycles and that we’re always following such cycles.  Kondratief Waves Sometimes spelled with a ‘v’ as Kondratiev.   You can read about them on Wikipedia if you want more background.   Suffice to say, there’s a compelling case that they do exist.  Maybe the famous economists are bending a theory to suit their own biases?  I don’t know, but I’m persuaded that there are cycles beyond the things we see and experience in our day to day lives.

Suffice to say, the theory goes that there are peaks and troughs in the cycles.  The peaks are times when the economy is growing and things are booming. This is driven by technological cycles.   But today a friend on Facebook linked to an article over in the Huffington Post about long cycles in history and sociology and events outside the technology area I worked in and kind of understand.   And yes, it’s all about what’s happening now with Brexit and the (perhaps not so) astonishing success of President -elect Trump.  You can read it here.  It struck me that the cycles the writer refers to aren’t that different from the technology cycles I’m thinking about as part of a Kondratieff waves.  Maybe there’s something in this theory.    IF it’s right then we’re about to enter a period of decline.  With the UK voting for an unspecified future of Brexit, with the US electing an isolationist President, with global climate problems and weather extremes getting more common,  who’s to say this theory is wrong?

Thinking about this a little more, I’m 56 so for pretty much all of my adult life I’ve been in an economy dominated by neo-liberal philosophies.  So these philosophies have now been in play for about 40 years.  And as a society we’re now seeing great upheavals.  Is this just the natural cycle of events playing out?   The inevitable decline of one philosophy to be replaced by another?   What’s next?   Hmmmmm…….