The news in the last day or so has ben full of the announcement of the Spaceport is going to be build in Sutherland.   So I  thought I’d provide a little background and context for anyone who might not be so sure of where Sutherland is.  You see, despite it’s name, its actually the very top part of the United Kingdom’s  land mass.   John O’Groats is in Sutherland. 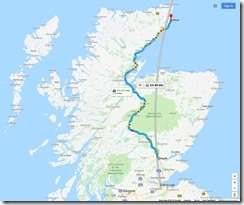 I’m typing this just outside Perth and I thought I’d see how long Google Maps reckons it would take me to get to Wick – which isn’t at the top of Sutherland.

It tells me it’s a distance of 213 miles and that it will take me some 4 and half hours to drive there.  For context, Manchester is 264 miles from Perth.  Or I could take a train, for mere 5 hour 49 minutes  (That’s got to be wrong.  Surely??)  Maybe not, train services north of the Glasgow-Edinburgh central belt in Scotland are not that great really.  I’m not sure that Wick has a station.  Bus?  Aye. Right.  So Scotland’s quite big really…

So I’ll get in my car and drive up to Wick.  Just get on the motorway and zoom along. Well err, no.  Not exactly.  There are no motorway class roads north of Perth – well not on that route.  So It’ll be the A9 then, a fabulous dual carriageway.  Again, not exactly no.  Many sections of the A9 are still single carriageway.  So getting to Sutherland is not as easy as say getting from London to Manchester, which at 208 miles is a comparable distance.   And this is where the grand Spaceport for the UK is to be built.  The centre for Space tourism for the UK is along a load of single carriageway roads

So the first thing the Spaceport in Sutherland’s going to need is a spaceport to get you there!  Pardon me for thinking this is not  really likely to happen….